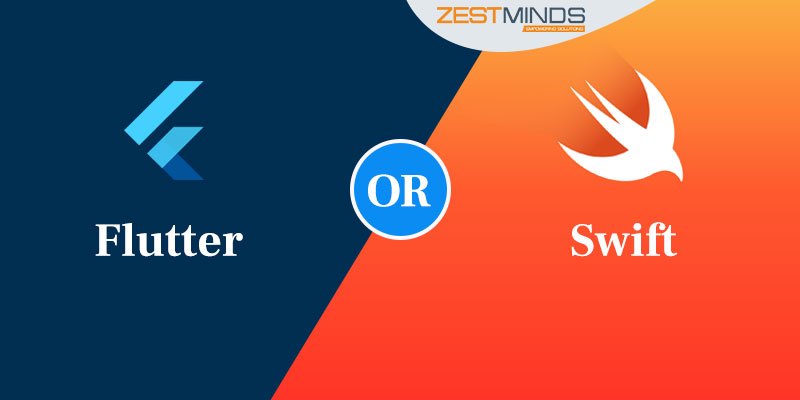 Which Is Better Flutter or Swift For iOS Development?

The emergence of Swift has stepped up the competition of native iOS applications than ever before. Among programming languages for the development of iOS applications, it boasts a high operational speed. What’s more, it has a scope to evolve further and bring in some exciting new features for developers in the future.

Flutter, on the other hand, is an open-source mobile SDK from Google. Developers can use its Dart programming language to develop compatible applications for both iOS and Android. It can operate without any change in the source code. Its working resembles that of React Native. Apart from a host of important features, it offers robust documentation in detail.

If you consider the installation and onboarding part to be the same for both, then you are sadly mistaken. One requires tools such as X-Code for the macOS device in the case of Swift. On the other hand, Flutter involves the usage of X-Code along with Flutter binary codes. On comparing the two, on-boarding of Swift can be considered a bit easier in comparison to flutter.

Reloading assists in quick and accurate assessment of the coding attempt made by the app developers. In the case of Swift, there is a requisite for making changes in case of accessibility, data, and button names. Also, you will be required to ensure that the device on its own can showcase the changes made. For this, approximately 10 seconds is needed to reflect the changes. In the case of Flutter, the time taken is comparatively less, and you can expect the same to be done in fewer seconds due to the presence of a hot reload attribute. It helps in reflecting the changes instantaneously and thus proves to be faster in comparison to Swift.

In Swift, there is a specific command using which the app can be profiled. In the case of flutter, a command line or IDE is used to profile the app, and it can take up to 2 to 3 minutes for the profiling process. Both languages tend to be excellent, talking in terms of profiling.

The development time can be easily calculated by using Xcode commands in the case of Swift. It is supposed to be one of the speediest ways for the development of IOS. The same applies to Flutter; one can measure the time of development using similar commands. But when you sit to compare the two, you will always find Swift to faster in comparison to Flutter, which is slow-paced. Another thing to take note of is that during initial builds, Flutter tends to be slower, but with time, it gets faster.

So, these were a few fundamental differences between the two. We hope that now you can identify which is better Flutter or Swift for iOS development. Taking into account all the aspects, Flutters proves to be more competitive owing to the sophistication, whereas Swift stands as an excellent language for development. Choosing between the two solely relies on your call as both are out to dominate the development market.