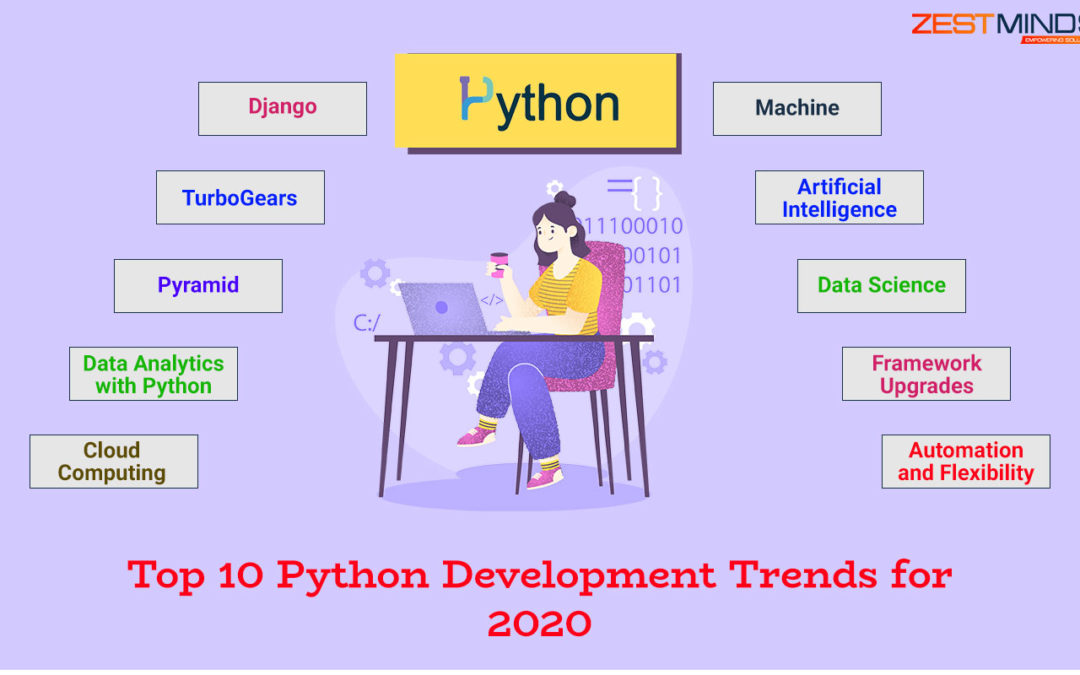 The Information Technology industry is ever-changing. With each passing day, you hear about new technologies and programming languages. However, one language that has remained constant through the years is the Python Development language. In the present-day scenario, more and more websites are being created with the use of Python’s programming language. Not just that, several conglomerates have developed and designed robust and successful apps to leverage the benefits of this language.

With the start of the year 2020, it is sure to achieve better heights and more popularity. But, before we dive deep into the different Python Trends 2020, let us understand more about this language.

What is Python, and how did it originate?

Python is a trending, high-level language used for programming purposes. The language is an object-oriented and interpreted variant with dynamic semantics, which makes it simple and easy-to-adopt. Moreover, the language promotes readability; hence, it reduces the overall cost for program maintenance. Designed by Guido van Rossum, this language has been developed under the Python Software Foundation banner. This language was initially released in 1990, and it has been 30 years to its popularity.

The core philosophy of Python language includes aphorisms like:

Given all these features and core implications, Python has surely enjoyed its fair share of fame and love by the developers and its ultimate users.

Now that we know the basics, let’s get into the reasons that make python development a trend for the year 2020 and what changes are to be brought about in years to come.

The frameworks by Python have always served as its rock. The trio-TurboGears, Django, and Pyramid have been instrumental with regards to provisioning faster services with reduced code lines. The upcoming year brings the promise of fruitful upgrades for these three frameworks with better plug-ins, newer libraries that will help leverage its complete potential. In short, Python is surely a wonderful language with an enhanced user-base that is multi-faceted.

If you haven’t heard about this Python framework as of now, you need to update yourself instantly. This particular framework is one of the highly efficient and flexible versions that minimizes the overall development time and effort for web applications. Given the fact that it is an open-source framework, Django receives regular and high-end upgrades over the plug-ins in order to ease the implementation procedure. There are several 3rd party libraries known to have enhanced the language’s popularity amongst renowned enterprises such as YouTube, Spotify, etc.

Another Python framework is TurboGears, which is a full-stack variant. It was created to smoothen and fasten the procedure for web application development. The entire framework depends on “Ruby on Rails” & was created under the classic MVC pattern. Moreover, it facilitates the developers a chance to rebuild the business sense all through the platforms while reducing the code lines.

The year 2020 is surely set to witness better capacity and stability components. Users can also see a microframework that might assist the developers in the creation of software in a sped-up fashion to help save money, time, and efforts.

The pyramid framework is perfect for the development of basic web applications fairly quickly. Moreover, its flexible and lightweight nature results in its popularity for the year 2020. The Pyramid Python framework is based upon the fundamentals that can be defined as nothing but a simple coding technique. It is an absolute favorite of the developers that possess enough capabilities to code unique web apps. However, it might not gel well with the novice developers.

With the start of the year 2020, the developers are sure to witness an increased usage of the Pyramid framework. The minimalistic framework by Pyramid offers ample freedom.

The year 2019 has experienced a biblical rise in overall user count with Python. The same trend is sure to be seen with the year 2020 as well with the software trends with Python. A research conducted by the company Stack Overflow suggests that the number of professionals that wish to master Python as opposed to other peer languages is substantially high.

Given its long list of attractive features, the platform has managed to grab the attention of enthusiastic coders and developers. Python has been deemed as an open-source platform that is far easy-to-understand and with lesser coding lines. Other features of this platform include amazing community support as well as detailed documentation, which are what every developer wants and needs.

The year 2020 is all set to bring a revolution with regard to Python platform usage. More and more conglomerates and business organizations are now adapting to the usage of Python regardless of their size and segmentation. For example, Facebook is a brand that has been continually using Python and has a development task force dedicated to the same. Most of the Facebook codes are jotted down in the Python language.

So, with 2020, more will join in with regards to Python usage.

Today, data analytics have reached far and wide. No business today is untouched by the need for data analysis. As per trends, there has been a steep in the use of data analytics in the market, and the same has been predicted for the upcoming year as well. In essence, at least 50 percent of the Python developers have been using Python for data analytics.

The availability of several libraries within the Python lineage is the prime reason for developers to opt for the same. There are several libraries that are task-oriented & created with the use of the Open-Source Python community. The language has surely been a delight for the developers and aims to be the same for 2020.

Python’s prime feature is its speed. It enables faster creation of codes, task automation, as well as scripting. Another factor that makes Python a great option is the fact that it serves as great assistance when talking about automation. This particular factor is sure to serve as the prime highlight for 2020. With time, Python is all set to attract more pro-developers that would love to stick with Python language.

Moreover, the flexibility provided by Python, in conjunction with its versatile nature, has surely managed to impress users and bring more numbers onboard. The language can adjust pretty well & work seamlessly with several other languages, hardware, frameworks, as well as architecture. Bringing Python onboard translates into the fact that you have access to flexibility and creativity for fulfilling your aspirations.

Inadequacy of Software Technologies without Python:

As we mentioned in the start, IT technologies are something that changes continuously. That is why having your hands-on languages that keep up with the trend helps you keep things in line with any changes or updates. The Python language comes with a knack of working seamlessly with the modern-day tech such as data science, networking, machine learning, Big Data, and so much more. That is why most developers seek to work with the language for the easy creation of codes and technologies.

Given all these integration features brought together by Python, the modern-day technologies might be rendered incomplete without its use.

Another thing that has led to the popularity of the Python language for the year 2020 is the fact that users can benefit from its integration feature. The systems present within Python can essentially collaborate with other popular languages. The language in itself is fairly extensible, which suggests that developers can code partial chunks using Python while covering others with popular languages in the market. That is why the language is used for plugging into enterprise applications.

Today, data safety is of prime essence, and people all over the world are looking for coding languages that provide the same. With the use of Python, data security is at its prime, given the fact that it can be compiled with cloud computing technologies. Python holds ample importance with minimal competition in the cloud computing area. If developers are to be believed, the language is considered to be a popular choice when it comes to languages with cloud-computing integration. In the present day scenario, this language is being utilized by Google within several software applications that are of the enterprise-grade.

Basics of the Academic Scenario:

When it comes to Python being used as the prime for teaching programming languages in academics, it certainly proves its excellence. Most universities and colleges dedicated to the world of computer science have, for long, been using Python for establishing the base in terms of coding languages. But, it is only recently that the achievers of the academic world have managed to understand the importance of implementing it as a subject. For the year 2020, the Python language will surely see an increased implementation within the syllabus.

There are several factors that make Python fit for use to teach a whole new generation of coders and developers. This language is completely in sync with the latest technologies in the market, which makes it all the more useful. It is easy with regard to learning, use, as well as implementation. Moreover, it makes up for an ideal material if you are a novice developer. For most courses, you might require help, but Python is actually easy to master without any external help.

Given the fact that Python has been in the computer science world for generations, it surely flaunts an amazing community base. Honestly, it brings in well-defined mechanisms for support and documentation. All-in-all, the popularity of Python language adds value to the coding pattern with added security, easy documentation, as well as troubleshooting.

The Python community can essentially be described as a huge collection of tech-enthusiasts that aim to reach further in terms of coding and software development. With such a huge base, it is obvious that the community can get all the support it desires regardless of the segment it is being incorporated into. If you have any queries, you can get it answered almost immediately with the help of this thriving community. Plus, you can always get access to expert blogs that are available online for increasing your knowledge base.

Other Popular Features that help Python Trend for the year 2020 includes:

Python isn’t a language that only does a single job. It is used for multiple Python features such as:

It is also a versatile coding language that adheres to multiple objectives that range from functional aspects to Object-Oriented Programming. Moreover, Python can also be used as a language for scripting and achieving information.

Python is definitely the leader:

It is known for a fact that the language, Python, is completely free & encourages the novice developers and coders to try it out. With Python, there is minimal cost and risk involved. Given the fact that this language supports compatibility across platforms, developers are always keen on making it a priority. This open-source platform also empowers the community members with a chance to add-in to the betterment of the existing codes and features.

In essence, Python has surely established itself within the roots of the software ecosystem and comes with a brighter future in the year 2020. In simple terms, it’s like salt for your food; without it, coding might become tasteless. The reasons for the same are evident in this blog post. In today’s date, Python has been giving strong competition to its contenders and will attain more popularity with the start of the year. For more information, explore the internet or stay tuned with us.