As businesses struggle to keep up with the backlogs, low-code/no-code platforms gain significant traction in 2021.

The platform that can significantly reduce the time required to create applications is the platform that uses low code development. Much better, by abstracting away much of the nuances, several low-code/no-code frameworks allow non-technical employees to create successful applications, thus expanding a business’s pool of competent app builders.

As a business can create applications quicker – and with a larger workforce of software designers – backlogs continue to vanish.

These advantages are provided by our low-code / no-code platform. Additionally, we go beyond and beyond by delivering a much more useful range of ‘huge picture’ capabilities with its ‘decoupled architecture’ architectural style “.

There are several advantages of using Low-Code Development

The framework allows businesses of all sizes to create automation that matters – whether it’s optimizing consumer interactions, delivering workplace creativity, automating procedures, or modernizing core applications. It enables this by integrating lightning-fast, visual, model-driven creation with a digital architecture designed on top of artificial intelligence, DevOps, Security, and Cloud.

Numerous individuals are diving into what is now referred to as no-code or low-code to catch the surge of interest in various ways.

Low-code or no-code apps designed with our company are automatically highly scalable, stable, and maintainable in an enterprise sense.

We ensure that whatever you create would not touch a wall, like several of these platforms’ predecessors did.

We further emphasize managing all low-code or no-code job products as an exchangeable suite of portfolio properties. This is a high-level view of low-code.

As businesses first investigate low-code, everyone is interested in developing one application or workflow and then developing another. That overlooks the significant value potential inherent in low-code.

If businesses focus exclusively on one or two applications, consumers can result in low applications that operate in silos. This means that new low-code applications are unaware of an organization’s current or about-to-be-built high-value properties, like records, logic, or utilities that are now being utilized by other software services and applications.

To stop this ‘siloed application’ effect by utilizing low-code or no-code, we recommend that businesses search for a low-code solution and not just a low-code network.

Consider what it means to create an architecture under which the industry is essentially built on top of digital channels. Rather than relying on a single network and providing a vast range of siloed applications, a decoupled design enables companies to aggregate bits or components into portfolios that can grow at varying rates and collaborate.

We also put a focus on Control.

Low Code Development Platform has an enormous amount of Control and governance without sacrificing functionality. So the pace and mobility that businesses typically want with low-code come at a cost; you can lose leverage and governance, as well as the large picture portfolio view of all the low-code applications.

All businesses should remember the long term while considering a low-code or no-code network. Low-code is about more than how companies can create applications more quickly. It can also be on how they can get hold of all those tools to bring them to cooperate – and do so quickly and easily.

A business will have an immediate need to build one or two critical applications; however, very soon, the business would have many low-code or no-code apps and services. Finally, you might be confronted with a thousand or so queries. Without a scalable infrastructure capable of supporting them during their lifecycle, you can be forced to re-platform.

To begin, there is Built Fast, which is all about pace.

Another is Build Right, which means that as things move quickly, it’s easy to lose sight that they need to scale to be highly stable.

And also, maybe most importantly, designed for the Future, because if you’re developing anything and losing all the engineers, which is a very regular occurrence these days, you’re going to end up with a lot of orphan code. And you could rewrite the whole document.

The decoupled design low-code framework views low-code applications and utilities as ‘Lego Blocks” that businesses can conveniently adapt to meet their specific requirements.

This strategy to low-code enables businesses to capitalize on opportunities by using and rearranging all those Lego bits – and adding “the hidden sauce on top” – to produce modular and creative applications and services. Once created, these new assets can be integrated with an organization’s internal applications and cloud-based SaaS resources – all without requiring extensive custom hand-coding.

Thus, if you have an additional thought, you will implement it quickly and independently – in as few as a few days. This gives you leverage over your roadmap, rather than waiting for the SaaS vendor’s period, which is likely to implement the function only after receiving 1000 requests from 1000 customers.

As seen through this ‘enterprise lens,’ the advantages of low-code ultimately multiply. As the company grows and adds more of these [low code] assets and software, more of your ‘hidden or secret sauce’ becomes ingrained in its structure. You can quickly merge, distribute, reuse, and scale them around the portfolio – all while maintaining reliability and visibility.

Therefore, precisely in the design, it enables businesses to take a long-term view of low-code benefits. If you dig deeper into certain kinds of platforms and look at their crucial functionality on a second stage, one of the most critical things is whether you have an interpreter or a compiler mindset.

When you use visual stimulation or no-code principles to express the software and what the machine wishes to achieve, you have a compiler mindset. In the center, you have technologies, such as a compiler or a code generator. It generates a decoupled work product, which results in entirely typical workloads and can be used independently of the modeling or no-code components of the device. Consequently, low-code applications that are highly customizable and simple to connect with other properties, services, or applications are developed.

An interpreter mentality follows a paradigm underpinning all is pushed down to the runtime. This model is the one that will operate before the model, graph, or piece of no code is interpreted. Simpler, but not decoupled, as the variable is now a runtime component. This method lacks the deep decoupling methodology used by a compiler, ensuring that businesses can encounter complications while attempting to invent, scale, or incorporate their low code applications.

When it comes to task criticality and scalability, there are certain items you cannot do if the runtime is not isolated from the code [generation] layer. Separate the two for full power and enterprise-class capabilities.

So it is advantageous to split the two and incorporate a significant amount of AI knowledge and processes into the runtime and generation [layer] to address a variety of problems.

Usage of a compiler model to build a decoupled design, businesses benefit from a high degree of simplicity and ease-of-use while retaining power and governance. This is particularly true in the case of integrations.

They are willing to interface with external components of internal organizations and then with the underlying infrastructure. Additionally, they are free to conduct integrations [within the enterprise] through Cloud or VPNs providers such as Google, AWS, or even modern state-of-the-art technologies that have not yet been developed.

One of the other good aspects is that if you have the isolation and that programmer decoupling model, you can restructure the application’s goal runtime and workloads even though the consumer does nothing. This becomes critical as you know that what you figured will have 50 users has 50 million.

With a Low-Code Development Platform, you don’t have to explicitly inform the system that [your application] has to scale to 50 million users – our code adapts instantly to that kind of environment and skills.

This kind of auto-scaling and other ‘enterprise sense’ functionality for low-code or no-code applications assists businesses in keeping up with and competing with the biggest, elite industries – often with far less capital.

We must enable IT, divisions, to assess their portfolios and manage technical debt while still allowing their teams to operate at warp pace. As a result, it’s a one-of-a-kind mix of stability and resilience with unified government and Control.

Low-Code Development Platform provides dashboards, accountability, and change management capabilities that allow a new developer or administrator to support current applications while still having the time and resources to create new ones.

We see that daily. When anyone joins a business, they will immediately grasp what is already there, create improvements, manage the applications, quickly scale it – and even put more creativity on top. Because it is so straightforward, these employees will even step on to another project without becoming overwhelmed.”

And for you to manage portfolios of this size while being swift and agile, which these styles of platforms promise? You must have processes in place that allow you to incorporate and build that architecture—the portfolio administration.

How A Low-Code Decoupled’ Architecture Contributes to Differentiation

After a decade or more of SaaS (cloud-based software-as-a-service) adoption, businesses’ need to distinguish is increasing. Yes, SaaS has become highly beneficial for smaller businesses seeking to update their internal and customer-facing applications. However, companies are slowly finding that they are losing some of their distinction.

When you wanted to catch up to your competitors rapidly, SaaS allowed you to do so. However, we also see companies encounter a discrepancy between what they want to do and the features offered on these SaaS sites. This disconnect generates a great deal of what Rosado refers to as “white spaces” that must be filled in. In other words, no SaaS is ever entirely accurate. The public wants just one or a couple of more tweaks.

As a result, the developers began receiving many of these update demands. However, those items have no spot in your current SaaS setup. Worse still, cloud computing systems are notoriously challenging to custom. It’s simply almost challenging to configure them in certain situations, isn’t it?”

This frustration becomes much more excruciating as you consider that the average business already uses 1,000 SaaS or cloud providers. Many observers and venture capitalists applaud the decoupled design solution to low-code.

If you wish to know more about the Low-Code Platform and how it will benefit your company, drop us an email at contact@zestminds.com. 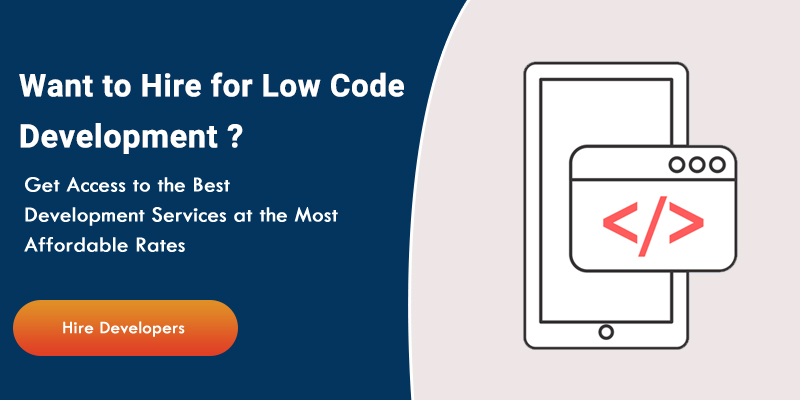