More than 77% of websites use PHP as their server-side programming language, and job postings for IT professionals with PHP experience have been steadily rising over the past few years. MySQL is the second most popular server-side language.

PHP is now one of the most widely used server-side languages on the web, and the number of people using it is still growing. The hard part? Even though PHP is a powerful coding framework, it’s not enough to just use it. Instead, businesses need to use PHP in a way that plays to its strengths and makes the most of its potential.

We thought it would be easier to show you what great PHP can do for websites by looking at 15 sites that are doing it right than to give you a long, boring explanation of best practices for PHP.

Before getting into our list, it’s a good idea to take a quick break and talk about how PHP works.

Rasmus Lerdorf created PHP in 1994 as an open-source server-side scripting language. It used to stand for “personal home page,” but as it became more popular, it got a new name: “hypertext processor.”

Lerdorf made sure that the language was easy to understand and use, so that users could quickly find, show, and store relevant data on a webpage. PHP has a lot of add-ons that make integration and deployment easier, and the development community is still strong. The most recent version of PHP (8.1.5) came out on April 14, 2022.

So, how do businesses use PHP code on the server-side to make good web design? Here are the Top 15 PHP Website Examples To Get Inspired.

This popular blog and content management system (CMS) is written in PHP and works with database tools like MySQL or MariaDB to store and retrieve information. The CMS tool’s PHP code talks to databases get important information from them and show it as static HTML elements.

Facebook has more than 2.9 billion users around the world, so its web and mobile sites need to be able to handle large amounts of traffic all the time. Mark Zuckerberg and Dustin Moskovitz, who started the site in 2004, wrote all of its code in PHP. In 2010, the company put in place HipHop for PHP, which made it possible to turn any source code into the source code of another programming language.

Even today, Facebook continues to use PHP. The company helped launch widespread adoption of this language.

Etsy, which sells crafts and furniture online, is one of the best PHP eCommerce sites in the U.S. By implementing HHVM (HipHop virtual machine) for its documentation, the company was able to speed up page loads for its 45 million users, which has helped the site grow steadily over the past few years.

Etsy used Phan, a static analyzer tool that automatically finds and reports incompatibilities, to help find problems between PHP versions on its website.

Wikipedia, an online encyclopedia that is very popular, uses PHP to run its many pages of information. PHP helps Wikipedia keep up with the more than 585 new articles that are added every day.

When HVHM is combined with PHP, Wikipedia can speed up the time it takes for pages to load for users all over the world.

Since its start in 2009, the communication and collaboration tool Slack has used PHP. The company is committed to making PHP work better in all of its software and services, which makes sense given how important efficiency and ease of use are to Slack.

By using PHP, Slack has been able to quickly find bugs in its programs, speed up the time it takes to get responses to requests, and cut down on workflow problems.

Tumblr has changed hands a few times in the past few years, but the site’s use of PHP has stayed the same. The site is often the source of funny memes and strange online content. For the past six years, Tumblr has made it easier for users to find their favorite content and learn about new internet trends every day.

Some of the things that help Tumblr work better are return-type declarations and scalar-type hints, which let you tell PHP functions exactly what kind of parameters they can take.

MailChimp helps businesses send out millions of emails every day, and its entire email system is based on PHP. The good thing? The code framework can handle the huge number of bulk emails that are sent every day without slowing things down.

MailChimp is using PHP even more than before. The company uses PHP for all of its applications and website development.

Yahoo started out as a PHP-only site. Its Mail, Answers, and News sections were all run by PHP. The company switched to a mixed programming language framework so it could compete with Google, but it was PHP that gave Yahoo a strong start in the market.

PHP helped Yahoo create strong account security, templates that are easy for users to use, and policy frameworks that can be counted on.

Drupal is a CMS that is used by more than a million websites around the world. Over the past few years, Drupal has used PHP more to help speed up and improve the efficiency of websites. Its latest version, Drupal 8, is built entirely on PHP.

Symfony is a PHP framework that is used by Drupal. As a result, the CMS’s core code framework can be rebuilt, API integration can be improved, and configuration options can be added.

PHP is what runs the cloud music service Spotify. Because PHP code is used and improved across Spotify, users can find millions of songs with a simple search. This has made Spotify one of the most popular music services in the world.

Using Symfony2, Spotify cut the time it took for users to load dynamic elements during a search, making it easier for them to find their music faster.

The Magento e-commerce platform, which is now called Adobe Commerce, is all about making online shopping quick and easy. This experience was built on PHP, and the site still uses PHP’s basic framework for its object-oriented applications.

This open-source platform is written in PHP and uses PHP frameworks like Symfony and Laminas to power sites.

The big drug company Pfizer manages its technology stack with the help of a PHP framework called Laravel. Now that the company is well-known because of its work to stop the pandemic, it is more important than ever to have a site that works well.

Laravel makes it easy for Pfizer’s web developers to update product lists and details quickly and make sure the code is working as well as it can.

Peloton, a company that makes fitness technology, also did very well during the pandemic. So, the company needed a way to make sure that it’s SaaS fitness app could keep up with a growing number of users around the world. PHP gave them the framework they needed.

PHP lets Peleton regularly update its app for users all over the world with few interruptions to workouts or code conflicts.

Moodle is used in thousands of schools across the United States to help students reach their academic goals. This learning management system (LMS) was built with PHP, but CSS and JavaScript are also used to do important things.

Moodle is built on PHP, but its add-ons are what make it stand out. The snag? Without PHP, these plugins wouldn’t work as well as they do.

Canva was first built on a framework that only used PHP, but it later added Node.js to add more features. Most of the backend work that Cavna does today is still done with PHP.

Simply put, PHP is made to be easy to use. This server-side language was made to make building and maintaining websites easier. Because of this, it is now the most popular server-side solution for both small and large businesses.

A simple rule for getting the most out of PHP is to keep things simple. Use the language the way it was meant to be used, which is to easily capture, display, and store data, and show users how easy it is. Other languages are better at some parts of server-side and client-side coding than PHP, but PHP’s focus on usability makes it a great choice for any website’s infrastructure.

In order to provide our PHP development services, we have a strong team of developers. A PHP script is a server-side scripting language designed for creating web applications. You can contact us at contact@zestminds.com and we shall discuss your ideas and convert them into reality! 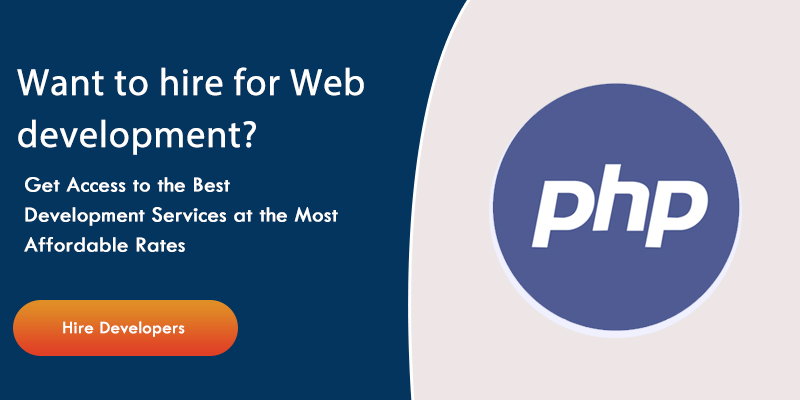