It is not an exaggeration if we say that Flutter is on an all-time rise when it comes to the world of iOS application development. The immense growth in popularity has boosted the Swift Vs. Flutter battle has become a lot more fierce and intense with each passing day. And this made us write this article where we are diving into the features of both these programming languages for iOS application development.

The high demand for hybrid mobile application development has boosted this battle between the Swift and Flutter. As many businesses are transforming digitally, these demands are ought to grow more and moreover the period of time. In this article, we will be presenting a detailed comparison between these two platforms.

Swift is one of the widely used coding languages that is used for iOS application development by programmers across the globe. Swift was developed by Apple as a type-safe, rapid, and dynamic language for programming. What makes it so incredible is the fact that this language can continually evolve with the changes that come in demands and trends. With Swift, the iOS developers get extensive documentation, efficient tools, and Swift’s comprehensive community. All of these features make iOS application development a fun and easy process.

Now that we have a basic idea about both these platforms, let us get into the comparison. Here we will give a verdict for each section and aspect we talk about so you can have a fair idea of which platform performs better for the given parameter.

As we all know, the process of mobile app creation is pretty time-consuming. For reducing both the cost as well as the time required for the mobile app development, it is imperative to opt for the best possible language.

At the current moment, Swift is the fastest available language for programming. What has shocked many of the application developers is the fact that it is just as fast as the C language is. You can easily calculate the project time with Swift. All you need to use is the Xcode command, or the Xcode build.

When it comes to iOS app development, Flutter is much slower as compared to Swift. But when you get beyond the initial builds, it gets a lot quicker. If you wish to test the build speed, you can use the exact same codes you used for Swift.

Here, Swift clearly wins in the comparison of the fastest language for programming.

The reloading method is all about code modification and simulator testing. In the case of mobile application development, more often than not, reload is needed. It represents any of the changes made in code in the app performance in real-time. This is one of the primary elements of mobile app development, which will allow accurate and quick assessment of coding.

Swift requires you to bring about changes in the features like data accessibility and button names. Additionally, the time that is needed to reflect the changes is much more in Swift. What is more, a developer needs to ensure that the simulation can represent the changes.

Changing the adjustments of the simulator is just a matter of a few seconds, all thanks to the Hot Reload feature of the flutter. This eliminates the time for waiting. So, all in all, when talking about modifications, Flutter is a lot faster.

In the comparison mentioned above, you need to update the text that is in the Raised Button Widgets. You need to do this from Press Me and then again load the app. This process can be undertaken in a matter of merely 3 seconds when you use the Flutter platform for application building.

Clearly, the app reloading on Flutter App is much faster as compared to the Swift application development.

When it comes to iOS development, you will come across numerous variations when testing both Flutter as well as Swift.

When it comes to the native iOS testing, Swift is definitely an excellent choice. Apple has XCTest to offer, which is a pretty comprehensive site when it comes to activities of native development like performance testing, application testing, and UI testing. Talking about the testing tools of Swift, they lack the crucial features of data-driven testing, snapshot tests, and grouping of the tests.

Flutter has an incredibly accurate system for testing to offer. It is pretty helpful when it comes to checking the writing from UI to the functional level. Not only that, but it is also helpful for the app developer to write the unit-level tests. The Flutter driver executes each and every test in a successful manner. Flutter can prove out to be very useful for the sake of testing as well as the documentation.

All in all, in this comparison, Flutter seems to be a much better option.

This plays a pretty crucial role when it comes to speeding up the process of development of the iOS app for the sake of continual growth and integrations.

Even though Apple is native and also has the Xcode server for continuous incorporation and delivery of mobile apps, it unfortunately still lacks scalability. So in order to tackle it, Apple came up with BuddyBuild that failed to make a lot of difference as such.

Flutter implements the CD/Codemagic CI with the Nevercode, which enables the continuous process of integration and development. It can build the Codemagic that builds apps without the need for any sort of modification for the sake of packaging, detecting, and packaging.

Clearly, Flutter is a better option in this parameter of comparison.

The process of installation and onboarding for both platforms are pretty different from each other.

The process of onboarding with Swift is a lot more easy and straightforward in comparison to Flutter. It requires native tools that use Xcode as an IDE. You need to install the Xcode on your macOS device in order to install the development kit.

The process of dynamic analysis that incorporates various functionality factors of an app like memory, CPU etc is called Profiling. Both the platforms of Swift and Flutter have incredible support to offer when it comes to application profiling.

By putting into use instruments, you can very easily profile an application in the Xcode. You can look for the profiling option for an app with the following code from the Xcode; “Product>Profile.” This will then introduce the instrument app. Here you can easily measure the app through various criteria. You can opt from various templates when it comes to Profiling. In order to analyze the threads, you can be selecting the Time Profiler when you can select a button numerous times. Now that you have launched the Time Profiler, you can begin with recording and then selecting the button numerous times.

You can very easily profile the iOS apps with an IDE or the command line with Flutter. What is more interesting is the fact that you can lay your hands on an excellent guide about Flutter application profiling from the Flutter Documentation.

For profiling the apps from the command line; use the below-mentioned command:

With this command, you can measure the amount of time it takes for the profiling of the Flutter App. The build time of Flutter for Profiling is approximately 149 seconds.

Profiling is pretty massive and relies on each and every device as well as apps. In order to benchmark the Flutter and Swift iOS apps, there are various flavors that are available. It is pretty evident that both Flutter as well as Swift have incredible support for profiling and debugging iOS applications. All in all, Flutter’s way of profiling the applications is pretty lightweight via browsers, wherein Swift has an app dedicated for this purpose.

The feature of accessibility in an app enhances the experience of users with disabilities. For an app developer for iOS, it is imperative for them to contribute to some efforts of building the iOS apps that can be accessed by each and every one. Let us figure out on which of these two platforms does it get easy to add the accessibility-related features.

Flutter iOS app does not offer support for the addition of accessibility. As an alternative to this, the documentation of Flutter suggests the estimation of the iOS app by putting into use the Accessibility inspector tool that is being offered by the Xcode.

In this arena of accessibility Features, there is still a scope of enhancement in Flutter in order to build a better app that can be helpful for people with the disability. All in all, there is a need for something on the roadmap of Flutter that can improve the accessibility of the Flutter apps.

In this part, we will be comparing the size of both the apps that are generated by both the platforms, viz Flutter and Swift.

The app is in the format of .app, and the binary size of these native apps that are made of Swift is approximately 23.2 MB in size.

Flutter generally generates the directory that is named as build/ios/Debugiphonesimulator. The size of the app can go even up to 52.4 MB. This is much bigger because of the app icons and assets.

Clearly, Swift is much better when comparing in this parameter.

Overall in comparison with Flutter, Swift is considered to be the most viable and common option when developing an iOS app. In Spite of that, Flutter has both an incredible speed as well as the complexity that supports various platforms with the exact same source code. It is safe to say that in the near future, Flutter may successfully take over the Swift when it comes to iOS application development.

If you are in search of someone who can build your iOS app, then you have landed at the right place. Zestminds is a leading and seasoned web and mobile app development company with years of experience. You can get in touch with us for your queries at contact@zestminds.com and we will get back to you. 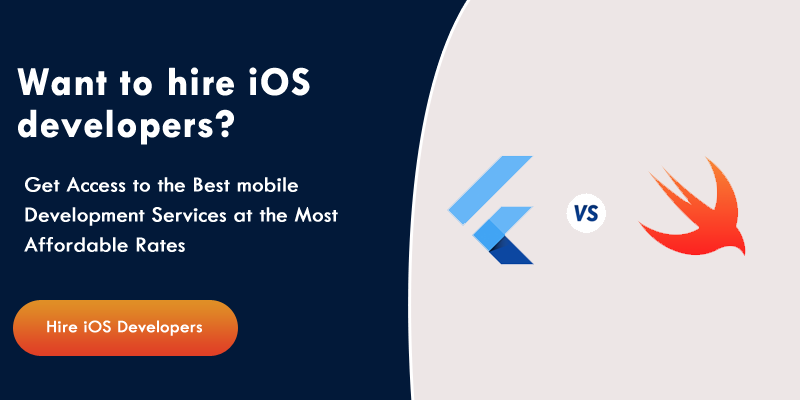