As a modern programming language, Kotlin contains all the elements necessary to create a mobile application that meets the current requirements. It grew so prevalent among Android developers that it placed second in the 2018 Stack Overflow Developer Survey.

Currently, Kotlin’s popularity is unquestionably at its zenith, and it offers numerous testing advantages.

Kotlin is a relatively new language that JetBrains is developing and sponsoring. According to publicly available information, more than $15 million was invested in the development of the language, and the language itself is another means for Idea to improve its popularity and sales.

After Hans Dockter, CEO of Gradle, stated at the JavaOne 2015 conference that Kotlin will receive formal support for authoring Gradle build scripts, the language began to gain popularity.

It was still in beta at the time, but the news roused those who were not indifferent. The hype wave had already begun to develop at that point. In May 2017, at the Google I/O conference, it was announced that Kotlin, along with Java, will become the official development language for the Android platform. This marked the apex of the language’s popularity.

Following this, Twitter was flooded with posts regarding the new phrase. There were numerous blog postings expressing admiration for it. JetBrains representatives have begun to declare that Kotlin is the future of JVM programming in various publications.

Now we provide you a look at 10 outstanding examples of Kotlin mobile application development. Please, have fun!

10 Examples of Apps Developed with Kotlin

Amazon Web Services (AWS) is the most extensively used cloud platform in the world, with over 175 full-featured data center services. AWS is used by millions of clients, including the fastest-growing startups, the largest enterprises, and the most influential government agencies, to decrease costs, boost agility, and speed up innovation.

Performance was the benefit they discovered with Kotlin mobile development. Currently, it offers the most functionality for its services. AWS, for instance, provides a selection of databases that are optimized for various application types, allowing customers to discover the most efficient and cost-effective solution.

How did Netflix establish such a stable and quick system for millions of consumers worldwide? The developer Mayukh Nair discussed the service’s architecture.

This service delivers around 250 million video hours each day to 98 million customers in 190 countries. At this scale, it is difficult to rapidly provide each user with high-quality content. A large audience necessitates the construction of specialized infrastructure, negotiation, and compromise with numerous parties, including content providers and ISPs that handle all Netflix traffic.

Regarding the application, Kotlin offers an intuitive syntax, which significantly increases the developer’s productivity and speed. It’s completely consistent. Application writing now requires fewer words and less time. Kotlin’s quality, conciseness, and readability have been its competitive advantage over Java, according to many.

Definitely one of the biggest companies out there for taxis and food delivery – Uber/Uber Eats.

As Rob Sadow noticed in 2015, the transport industry faced a major challenge:

•  85% of working people commute to work by car every day.

•  Meanwhile, they released 6.2 tons of carbon dioxide into the atmosphere.

Rob wanted to fill this void, so he developed an application. Four months after its inception, the app had over 20,000 rides and garnered $ 5.2 million in funding.

However, they used Kotlin for iOS development. Uber uses Kotlin for internal tool development. In addition, the Kotlin source code is accessible to any developer who wants to use it. Its incorporation into the project is likewise completely gratis. In addition, the source code allows for the problem to be quickly identified and reported to the language’s creators should it occur.

4. Pinterest – How to Boost your Core Business Metrics with Kotlin

Pinterest began Kotlin mobile development as a result of its goals for worldwide expansion, which lead them to the mobile web.

After examining the use of the mobile version of the website by unauthorized users, it was determined that just 1% of users registered, authorized, or installed a native application on their old, slow site. They had a fantastic potential to increase conversions, therefore they hired Kotlin developers.

Pinterest updated its website using React, Redux, and webpack in three months. Moreover, they completed the app’s redesign. The Java developers were charged with maximizing their expertise and experience. Therefore, all relevant libraries were accessible to programmers.

As you may be aware, it is possible to develop Kotlin modules that are compatible with Java because both languages can be used in the same project. This has become a huge benefit for enterprises with a substantial Java code base.

The not-so-famous Coursera is equally as popular. More than 2,000 courses, approximately 140 universities from various countries, and participation in the project are available here. Lectures can be viewed online or downloaded for offline viewing. The application is offered at no cost. However, a fee is required to acquire a certificate of the discipline listened to.

In addition to using the Kotlin programming language, you can also learn it on this platform. The app’s mobile developers were astounded by the functionality of this code.

This programming language is incredibly user-friendly for both seasoned programmers and novices. The syntax of Kotlin reflects the creative nature of the language. Extremely laconic, concise, and comprehensible.

Coding rules aid programmers in discovering tiny flaws that are difficult to detect prior to program execution. In many programming languages, the most prevalent error is the attempt to retrieve null values. This produces an error. Kotlin seeks to eliminate these types of programming errors. Due to this, Coursera’s app does not contain any errors.

A technology business in the United States that creates solutions for taking and processing electronic payments must have a functional and trustworthy application. This is the absolute truth.

The mobile application Cash App from the payment business Square now has a function to instantly purchase Bitcoin for US dollars. Users can arrange the purchase of cryptocurrencies on a daily, weekly, or biweekly basis.

This function was implemented with the assistance of IOS developers and Kotlin code. The name of the service was “Autoinvestment.” End of last year’s December, Square’s LinkedIn page posted a job opening connected to the development of new products, which sparked rumors that the business intended to add this functionality to its mobile application.

Square clients have been able to invest in Bitcoin using the dollar-cost averaging (DCA) approach, which should allow them to lessen the risks associated with cryptocurrency investments.

7. Trello – from Java to React

Trello is one of the most popular online project management tools, and it is especially popular among small businesses and startups. It enables excellent work organization based on the Japanese technique of kanban boards.

Fog Creek Software was designed in 2011 using Backbone.js, MongoDB, and Node.js. Soon after adopting Kotlin, they obtained the primary benefits that have contributed to Trello’s popularity.

•  Easy-to-use interface and compatibility with other popular online tools.

The first version of the renowned project management program Basecamp was published in 2004, the second in 2013, and the third very recently.

Finally, the restriction on the number of projects in all tariff plans was eliminated (until now, unlimited projects were available only at the highest tariff). Basecamp now has a number of new features, including automatic team check-in surveys, such as “what have you done today?” In addition to setting a rest schedule (when Basecamp won’t send notifications), Basecamp also offers private chat (pings), an improved Campfire group chat, separate client chats, the “Applause” button (similar to “Like”) in posts, @mentions, project timelines (like Facebook), assigning tasks to different employees, enhanced searches, and reports., document folders, a new text editor, and updated mobile apps for iOS and Android.

Moreover, all of this became available as a result of Kotlin’s development. Since many programmers have converted from Java to Kotlin, the designers of Kotlin made it compatible with the Java library for maximum usability. It is capable of utilizing all known Java frameworks and libraries, as well as individual modules in existing applications.

Another educational technology service. Its primary functions are to help university and school students and teachers practice and master their abilities and to facilitate the learning process.

“Android, iOS, and backend developers prefer Kotlin over JavaScript when developing and maintaining their code. Even their front-end web engineers were intrigued by what Kotlin could do after interacting with the interactive “Kotlin by Example” section of the Kotlin website.

Have you stumbled discovered a fascinating article? Did you see the advertisement for the concert you should attend? Have a fantastic idea? You require a location where all of the information may be stored, and more crucially, where it is simple to locate. This might be a notepad, a screen covered with stickers, a program on your mobile device, or a note-taking service (for example, Evernote).

Thanks to Kotlin, Evernote is a highly adaptable management tool. Reasons why:

•  Notes can be created in it, along with typed or handwritten text, office documents, and photos.

•  You don’t have time to write? Take a photo of this note and then find it using the text in the photo (yes, Evernote supports many languages).

•  Would you like to write down an idea, but it’s inconvenient? Record it in Evernote.

•  Do you need a colleague to edit your document? Make sure they have access to it.

•  Is it necessary to have all your communication in one place? You can chat on Evernote.

•  Do you need to remind yourself of something in a few months? Certainly, Evernote helps you in this also

•  Are you interested in making a presentation? This feature is also available in Evernote. You can even use a laser pointer instead of a cursor.

You may be familiar with Lazy Loading from web development. This feature allows loading only the application’s required starting content, which considerably saves loading times. This Kotlin feature makes it simple for Android developers to prioritize primary resources by storing them in main memory and loading secondary memory resources progressively. This decreases application starting time, which is a critical success factor for any project. This functionality makes Evernote the app of choice for all office employees.

Kotlin gives programmers everything they need to work with a new language with ease. Android app developers finally got the tool they’ve been waiting for: it’s sleek, intuitive, and devoid of superfluous features. Do not be concerned about Kotlin’s deficiencies (of course they exist). They are minimal, and the acquired experience will help you manage them.

Looking for Kotlin developers? We have the best Kotlin development team. Drop us an email at contact@zestminds.com to discuss your requirements. 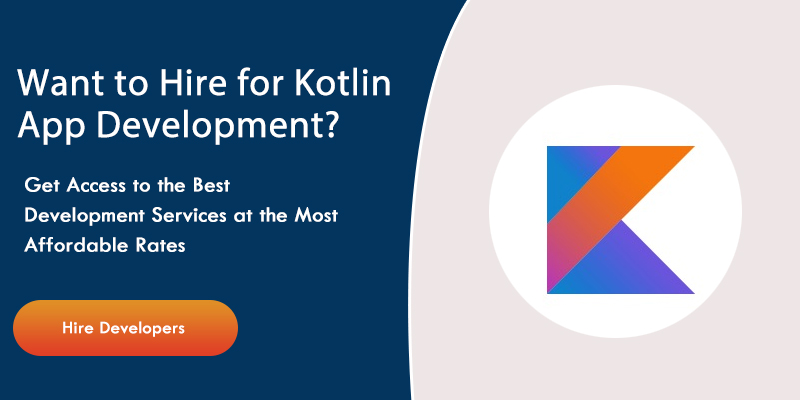 How to Hire Kotlin Development Company?